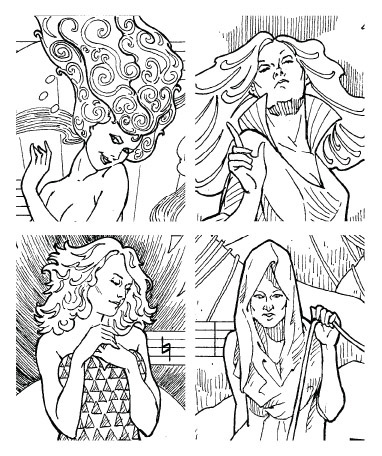 Today I entered an original drawing at York Art Association for the Page to Palette exhibit.  We were challenged to use a work of prose, lyrics or poetry to inspire a work of art.  My entry came from the opera and here is my inspiration behind my work.

Richard Wagner’s  “The Ring of the Nibelung”

Shortly after viewing the entire Metropolitan Opera production of Wagner’s Ring Cycle, I was inspired to create this drawing.  As I was trying to distill one scene from each of the four opera’s that make up the Ring Cycle, I found I could connect them to the four elements.  I concentrated on only female characters who drove the narrative in each part of the Cycle

Water, where we begin the story, to find a teasing Rhine maiden guarding the ring from “The Rhinegold”.  Air, where we find an angry sky goddess, Frikka voicing her displeasure at certain events in “The Valkyrie”.  Fire, where a lovelorn fallen Valkyrie, Brunhilde waits for her love in “Siegfried”.  Onto Earth, where a Norn sister sees the impending doom of the twilight of the gods from “Gotterdammerung”.  Finally I interweaved notes from the score of the opera, the structure from which this epic story unfolds.

Special thanks goes to Mark Clark for allowing me to display my work from his collection.  Looking forward to this show and the opening reception on August 30th.