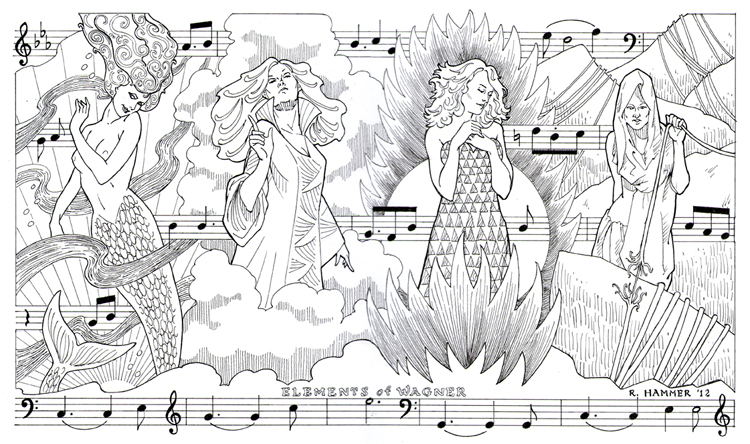 Richard Wagner’s  “The Ring of the Nibelung”

Shortly after viewing the entire Metropolitan Opera production of Wagner’s Ring Cycle, I was inspired to create this drawing.  As I was trying to distill one scene from each of the four opera’s that make up the Ring Cycle, I found I could connect them to the four elements.  I concentrated on only female characters who drove the narrative in each part of the Cycle

Water, where we begin the story, to find a teasing Rhine maiden guarding the ring from “The Rhinegold”.  Air, where we find an angry sky goddess, Frikka voicing her displeasure at certain events in “The Valkyrie”.  Fire, where a lovelorn fallen Valkyrie, Brunhilde waits for her love in “Siegfried”.  Onto Earth, where a Norn sister sees the impending doom of the twilight of the gods from “Gotterdammerung”.  Finally I interweaved notes from the score of the opera, the structure from which this epic story unfolds.

This Pen and Ink original received a Best of Show award in the Page to Palette Open Exhibit at The York Art Association.